Skagway’s most popular railroader is back in the cab for his final ride. The last of the White Pass & Yukon Route “hogheads” from the glory days of steam engines, rotary snow plows and big freight trains has passed on.

J.D. True died Sept. 17, 2000 in Wasilla, where he had spent the last few months receiving physical therapy for a 1998 stroke that left him partially paralyzed.

True had been feeling well up until a couple weeks ago – enough for his family to start planning a move to Mexico for the winter so he could be with his daughter, his wife Anna said. But recently his blood pressure started dropping and he twice had to be admitted to Valley Hospital, where he died on Sunday evening.

Their daughter, Linda, arrived in Skagway this week to help with arrangements. True’s body will be cremated and a private train will carry his ashes to be spread up the line next week, said White Pass vice president Gary Danielson. A memorial service has tentatively been set for Sept. 30 at the Eagles Hall.

True’s life, especially his railroading years, was well-chronicled in two books that he wrote: “Along the White Pass High Iron” and “It Happened on the White Pass.”

J.D., which he claimed stood for “just J.D.,” was born in Benton County, Arkansas on August 20, 1922, the son of a poor farmer. The family migrated to California in 1926 in a Model T truck, and then on to Idaho. They eventually ventured back to Missouri and Arkansas, where J.D. stayed until the middle of his senior year in high school.

An uncle and aunt in Skagway, Harry and Etta Church, loaned young J.D. the fare to come north, and he arrived aboard the SS Yukon on June 24, 1940. He worked that summer for the federal Civilian Conservation Corps and the old dairy farm north of town. In the fall, he went back to school and was graduated with the Skagway High class of 1941.

Like most of the young men in town, he went to work for the railroad, starting as a boilermaker helper on June 8, 1941. About six months later he transferred into engine service “and never looked back,” he wrote in an introduction to one of his books. Except for a stint in the Army in World War II, as a railroader, he remained was employed by White Pass for about 40 years.

Operating the steam engines and rotary snow plows was his passion, but he became smitten with something else up the line after getting out of the service. A waitress at the Bennett eating house, Anna Gabel, caught his attention, and J.D.’s proposal after a brief courtship is the stuff of Skagway legends.

They were married on Aug. 19, 1946 and later had two children, Linda and Buddy, whom they raised in Skagway. 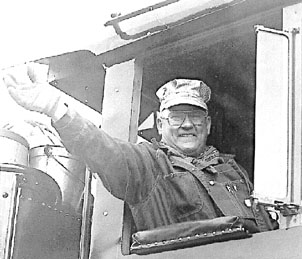 True did it all on the railroad, and later chronicled events from every drawbar to riding an engine across a ravine and living to tell about it. He loved being called the “hoghead,” an old railroad term for an engineer.

He saw steam engines and rotaries replaced with diesel “hogs” and bulldozers, and then saw the old equipment make a comeback. One of his fondest memories was driving restored Engine 73 back to Skagway on June 7, 1982 after Anna christened it at Lake Bennett.

“When we got to where the highway parallels the RR there was many people from Skagway pacing the train,” he wrote. “It almost made a tear come to my eyes when we came in sight of Skagway Depot to see several hundred people waiting to welcome the coming home of Steam Engine No. 73, and she did a bang up job of it!!”

Unfortunately, later that fall the railroad would shut down, forcing J.D. to “retire” from the WP&YR. However, when the railroad came back as a tourist attraction in 1988, he obtained a waiver from the Railroad Retirement Board to help train the new breed of steam engineers and also spent two years as a part-time dispatcher before his final retirement in 1990.

Until his stroke, he spent time tinkering with bicycles at “J.D.’s Bike Shop,” venturing out to railroad reunions, driving the senior citizens van, working on his books, and whipping his publishers at backgammon.

He was an active member of the local American Legion post, and the Elks and Eagles, where he was a life member and past president. For a time, he also helped with the Days of ‘98 Show, which Anna managed for many years when it was an all-volunteer show.

“We did so many good things for one life, I can’t complain,” said Anna, his wife of 55 years.

In addition to his wife and children, J.D. is survived by grandchildren Jeff Hamilton, Chris True and Scott True, and great grandchildren Kylie, Andrea and Greg Hamilton.